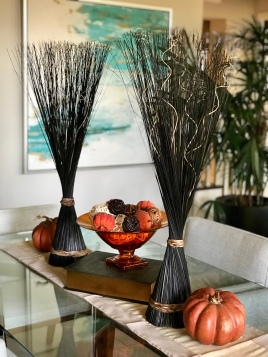 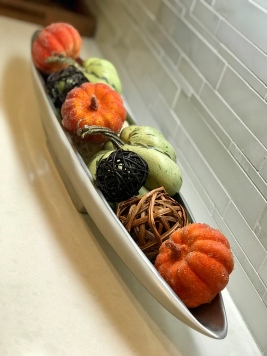 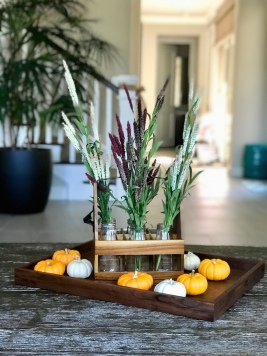 This year we’re not going to be in town for Halloween. I’m sad I will miss the kids dress up in their costumes and go ‘trick or treat’ with them, but also looking forward to a little get-a-way with just my hubby and me.

So since we won’t be here, I decided to skip all the creepy and fun Halloween decorations and move straight into Fall. With an entire season for inspiration, there are many ways to decorate your home and I’m completely Fall’ing in love with Fall (yea, I know I’m a nerd). =)

Some people go all out during this time of year while others buy a couple pumpkins and call it a day. As a girl with a modern and simplistic interior style, I tend to ‘Fall’ somewhere in the middle. I began by bringing out my decorations from the previous year, some of which I will use in the exact same way, and some that I will brainstorm to use in a new way.

I love pumpkins, pinecones, sticks, straw and try to mix all of these elements together. I had some fake heirloom pumpkins in my storage that totally evoke the rustic Fall vibes. Along with those, I incorporated a bunch of real mini pumpkins and scattered them throughout the house in order to add a little touch of Fall to every corner. I like both orange and white pumpkins for a modern and traditional look. In my opinion, you can’t have Fall without orange so bring on the warm colors!

I have a couple of large lanterns which I keep out all year and filled with an assortment of different colored squash, pumpkins and pinecones. When decorating, I think it’s always smart to transform some of the items that are already out in an effort to make it less work and remain true to your style.

I swopped out the runners on my dining room and kitchen tables with burlap, another Fall essential! I arranged some dried wheat bouquets in clear bottles of a wooden crate that once was a six pack of beer. I love to get creative with random things! I bought some decorative branches for the focal point of the dining room table. The height of the sticks brings the whole centerpiece to the next level. Last but not least, I artfully mixed together pinecones, pumpkins and straw balls into an orange salad bowl which I placed in between the branches.

Throughout the holiday season, my decorations will evolve — I will move things around, introduce new things and remove what I get sick of. The great thing about a general ‘Fall’ theme is that these decorations will hold over until Thanksgiving so I can enjoy them longer. I’m officially in the Fall spirit… Hello Fall!